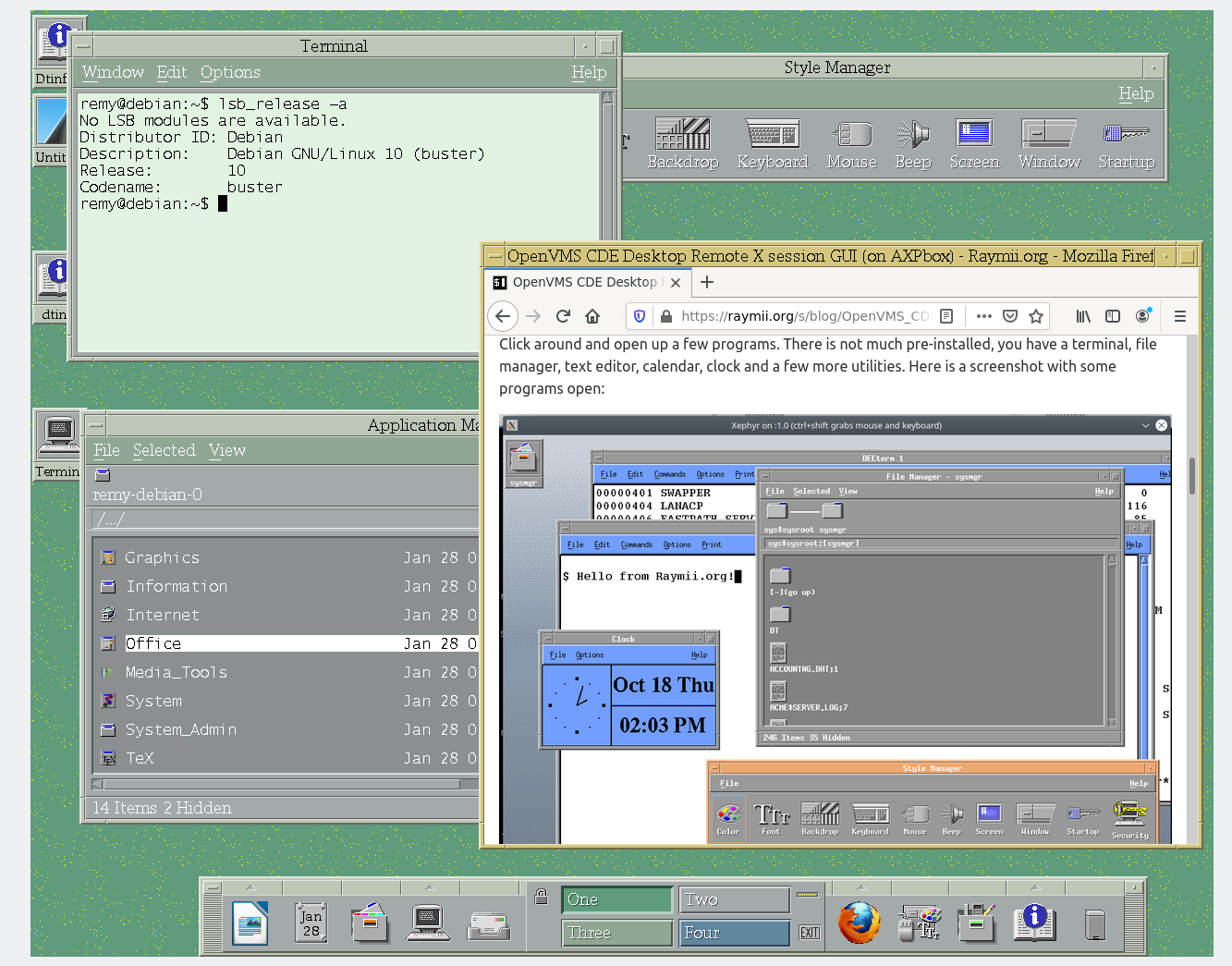 CDE on Debian 10 with Firefox open

While playing around with the GUI on OpenVMS I was looking for CDE documentation and I found out CDE is still being developed and can be installed on modern linux. This quick post shows you how to install CDE on Debian 10 and includes a bit on compiling GENERIC TETRIS, the same program I installed on OpenVMS.


Really cool to compile and run a game from 1992 on a retro/modern desktop environment. Makes you wonder how the world could look, if everyone was on CDE still. Resource usage is low and everything is so snappy and quick, it feels amazing. I might even consider switching to CDE fulltime. 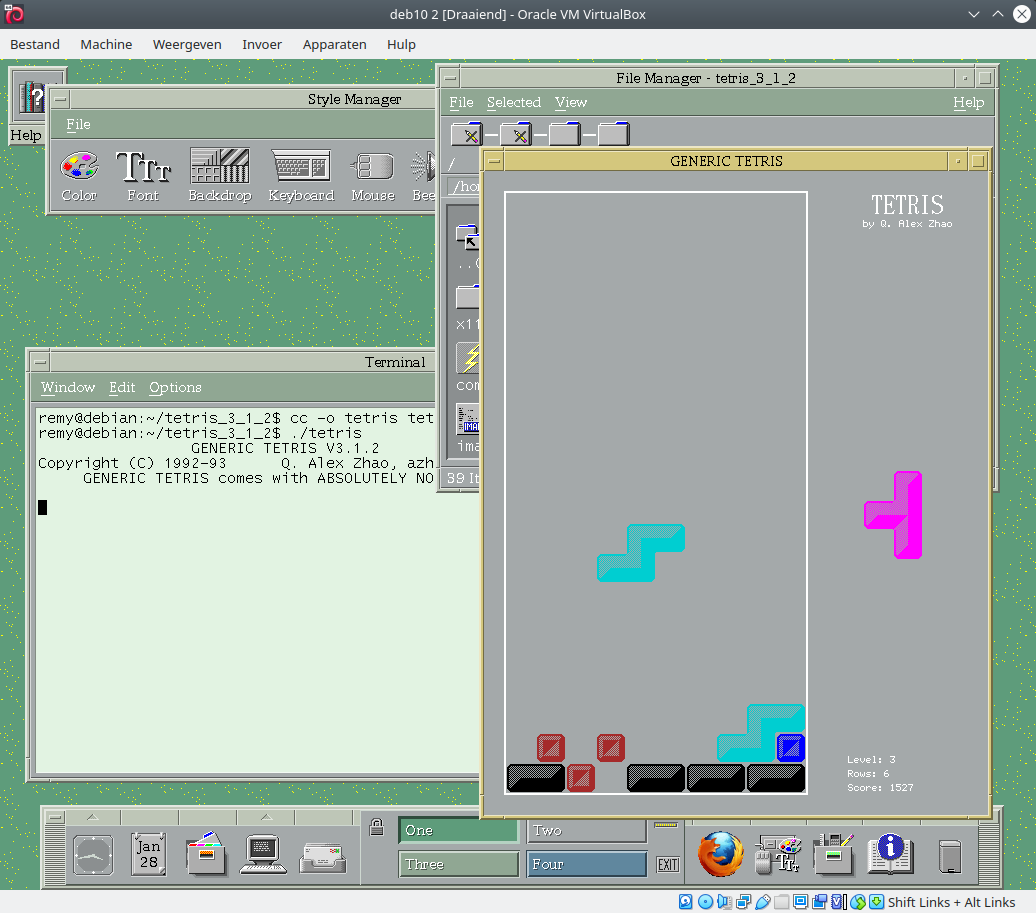 The CDE project page has great documentation on installing on modern linux. This guide is specific for Debian 10 and does not use the dtlogin session manager, but integrates CDE in the "regular" login manager, either lightdm, gdm or sddm. This guide by mike632t (Mike?) was very helpful, but I didn't have any problems with locales. He also adds a service for dtlogin, which I won't, I'll be using the regular login manager.

I assume all steps are run as root, in root's home folder (/root/).

The CDE documentation has information on locales, but my debian 10 XFCE install did not require any of those steps.

Get the CDE source code with git

Use git to get the source code for CDE:

Go into the new folder and continue on to the next section.

Execute the make command to build the desktop environment. This will take a long time, on my virtual machine with 4 cores and 4 GB RAM it took almost an hour. You can edit the Makefile and add -j4 at the beginning of the MAKE_OPTS line, which will then use more cores. Still takes long though.

When the build finishes, use the following command to install CDE:

Finally, copy the session file for your regular login manager. If you do this, you will be able to select CDE next to XFCE, GNOME or whatever you currently use.

Reboot to make this active.

Why not use dtlogin? That will probably mess with your current settings so much that you will have difficulty going back. Also, in my case, dtlogin sets the resolution to 800x600, lightdm uses the regular resolution. You can use xrandr or arandr to change the resolution in CDE, but if it works right away that's just easier.

This is optional, but if you want to keep your system clean and be able to remove CDE afterwards, you can use checkinstall to build .deb packages for easy installation and removal. When building .deb packages for other people, checkinstall is not recommended but for your own system, it helps keep things tidy.

checkinstall is not in the main repo's for Debian Buster, but is in the backports. Add the following line to /etc/apt/sources.list:

Do an update and then install checkinstall from backports:

Execute checkinstall instead of make install after the make:

If you do follow Mike's guide, then you can use dtlogin as login manager. It looks like this:

If you follow this guide, you'll use your regular login manager, select the CDE session in there to login.

After logging in the first time, a big blue screen with some version information is shown: 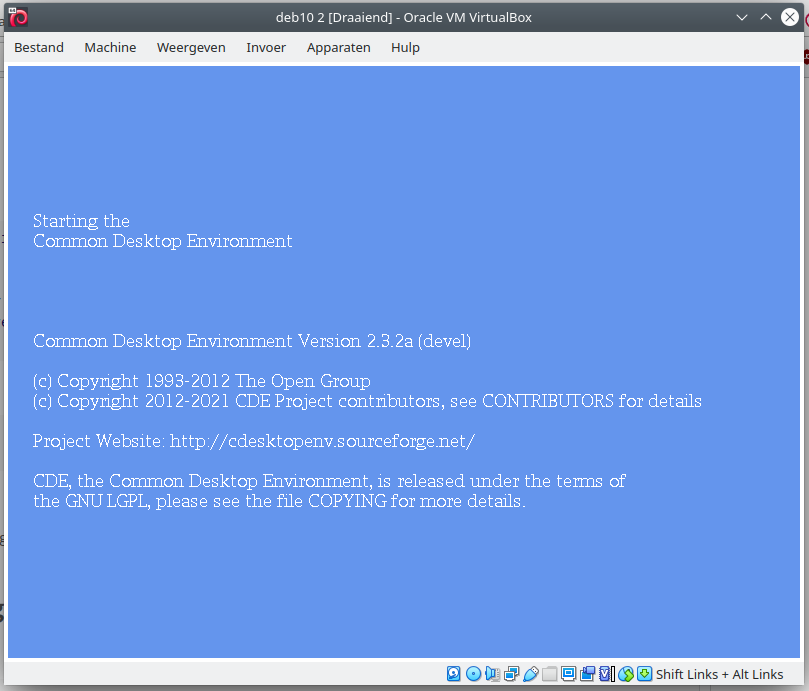 The desktop is nice, clear and clean, with a help window popping up, just like on OpenVMS. The below screenshot shows a few open programs, like firefox and the Application Starter:

Go play around with all the programs, like the file manager, terminal, style manager and the dock. If you use local mail, there is a mail client and also a print program. Works with CUPS so if you've got a printer setup, it should be usable right away. Resource usage is low and everything is so snappy and quick, amazing.

If you want to auto-start applications on CDE when logging in, you can simply open them and not close them before logging out, it will remember them. You can also put them in a file:

Add one command per line, ending with an ampersand (&):

Now onto the fun part, gaming!

After posting the OpenVMS CDE article on Lobsters, user kidon replied on the tetris part. It's written by Qiang Alex Zhao and although the Makefile being outdated, you can manually compile and run it. First download the source, I mirrored it on this site:

Unzip and go into the folder:

There should now be a binary in the folder which you can execute:

Running it pops up a graphical window with the game:

Use the arrow keys to move the piece around, space to plop it down instantly, k to rotate and n to see the next piece.

Afterwards your score is shown: